A lesson by Lois Bianchi on the current state of the mass-media in the US was organized on Friday, 20th of April 2007 in Zadar Public Library, by the US Embassy in Zagreb and Zadar Public Library American Corner. This lesson is intended for the media specialists (TV, radio, newspapers...), students, high school students and general public... Lois Bianchi worked in television and film production for 30 years, and has made documentaries, docudramas, dramatic programs, performance programs and experimental videos for PBS, CBS, ABC, and for numerous independent companies During her years as Director of Local Programming and Production at WNET/13, New York City’s public television station, she created and served as Executive Producer of the weekly public affairs series METROLINE, the SUMMERFARE and ART EFFECTS performance series, the experimental NEW TELEVISION and of many specials. She also taught courses as an Adjunct Professor at New York University's School of the Arts, and at the Columbia University Graduate School of Journalism Ms. Bianchi then moved into the academic world, and spent the next 15 years as an Associate Professor, teaching writing, production, and broadcast ethics to graduate and undergraduate students at San Diego State University; at the S.I. Newhouse School of Public Communications, Syracuse University; and at Queens College of the City University of New York. In 2000, she received a Fulbright teaching award and spent a semester at the University of Zagreb. Since then, she has returned to the University several times to conduct workshops in Broadcast JournalismAlong with her teaching, she continued to consult, produce, and write. Her most recent effort was a co-production seen both in Croatia and the U.S. about an American college student who visited the land of her grandparents for the first time Lois Bianchi is the recipient of several New York Area Emmy Awards, two CEBA awards, a CINE Golden Eagle, a Gold Plaque from the Chicago Film Festival, and a Silver Gavel from the American Bar Association, among others Her productions have been seen at the International Public Television Conference and at the American Film Institute Video Festival Lois Bianchi received a MA from Hunter College and a BA from Tufts University. 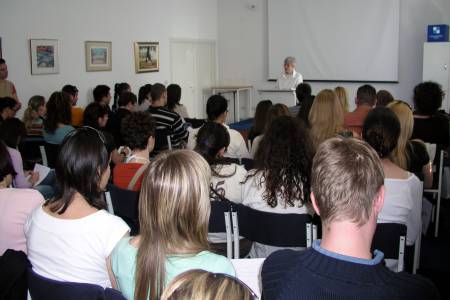